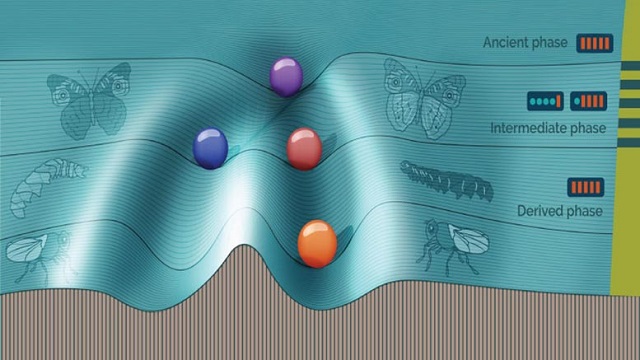 Computer simulations of cells evolving over tens of thousands of generations reveal why some organisms retain a disused switch mechanism that turns on under severe stress, changing some of their characteristics. Maintaining this “hidden” switch is one means for organisms to maintain a high degree of gene expression stability under normal conditions.

Tomato hornworm larvae are green in warmer regions, making camouflage easier, but black in cooler temperatures so that they can absorb more sunlight. This phenomenon, found in some organisms, is called phenotypic switching. Normally hidden, this switching is activated in response to dangerous genetic or environmental changes.

Scientists have typically studied this process by investigating the changes undergone by organisms under different circumstances over many generations. Several years ago, for example, a team bred generations of tobacco hornworm larvae to observe and induce color changes similar to those that occurred in their tomato hornworm relatives.

“Computer simulations, when built on reasonable assumptions and conducted under careful control, are a very powerful tool to mimic the real situation,” says KAUST computational bioscientist Xin Gao. “This helps scientists observe and understand principles that are otherwise very difficult, or impossible, to observe by wet-lab experiments.”

Gao and KAUST research scientist Hiroyuki Kuwahara designed a computer simulation of the evolution of 1,000 asexual microorganisms. Each organism was given a gene circuit model for regulating the expression of a specific protein X.

The simulations suggest that populations of organisms maintain their switching machinery over a long period of environmental stability by gradually evolving low-threshold switches, which easily switch in fluctuating circumstances, to high-threshold switches when the environment is more stable.

This is easier, says Kuwahara, than reverting to a nonswitching state through small mutational shifts. “Instead, we end up with a type of ‘hidden’ phenotypic switching that acts like an evolutionary capacitor, storing genetic variations and releasing alternative phenotypes in the event of substantial perturbations,” Kuwahara says.

The team next plans to use computer simulations to study more complex biological systems while also interactively collaborating with researchers conducting wet-lab experiments. Their aim is to develop theoretical frameworks that can be experimentally validated.